Is the US Tax System a Political Pawn?

We previously posted Taxpayer Advocate Delivers Annual Report to Congress and Cites Offshore Voluntary Disclosure Program Inequities where we discussed that the report says the combination of the IRS’s increasing workload, the erosion of public trust occasioned by the IRS’s use of “tea party” and similar terms in screening applicants for tax-exempt status, and the sharp reduction in funding have created a “perfect storm” of trouble for tax administration and therefore for taxpayers.


“Taxpayers who need help are not getting it, and tax compliance is likely to suffer over the longer term, if these problems are not quickly and decisively addressed,” Olson wrote.

The Washington Post  has charts supporting the taxpayer advocates conclusions: 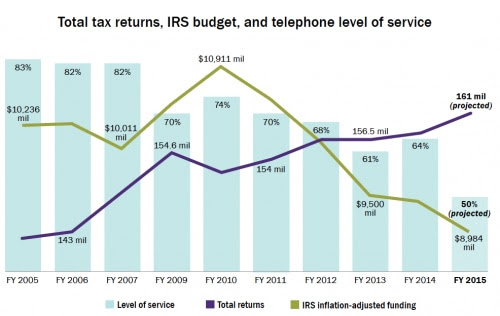 Source: Taxpayer Advocate Service, 2014 Annual Report to Congress.
Not shown here is the fact that the tax code has gotten more complicated over time, leading more taxpayers to need assistance from IRS reps. The current filing season is likely to see even more confusion amongst taxpayers, given the complicated tax implications of the Affordable Care Act. 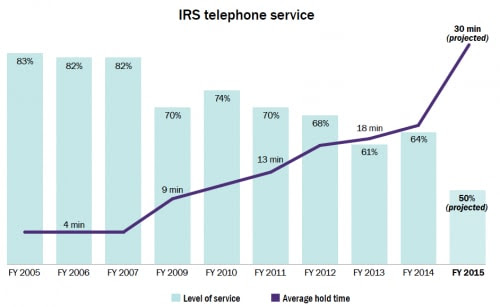 About half of calls are expected to get answered this fiscal year, after an average waiting time of 30 minutes. That means that taxpayers should expect to wait at least one half hour on hold trying to figure out which form they need to complete.

The Washington Post also provides a chart showing what share of correspondence from taxpayers responding to a notice about additional funds due has been gathering dust for more than the amount of time the IRS considers acceptable (generally, 45 days): 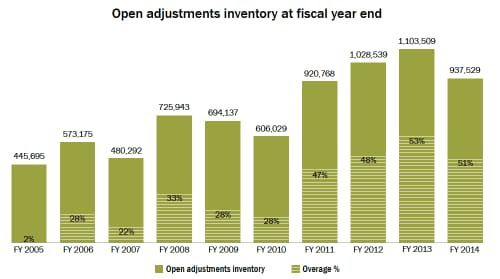 The Washington Post  concludes that frustration borne from such poor customer service is likely to wear on “tax morale” and hurt rates of voluntary compliance, which is the primary way our taxes are collected (98 percent of tax revenues are remitted voluntarily and in a timely manner; less than 2 percent is collected through enforcement actions). Meanwhile, individuals and companies hoping to play fast and loose with their interpretation of the tax code are likely able to get away with more, since budget cuts have also whittled down the IRS’s ability to catch tax cheats.


Is this any way to run a country?