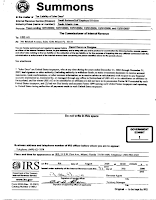 According to the DoJ , a federal court in the District of Massachusetts entered an order on April 1, 2021 authorizing the IRS to serve a John Doe summons on Circle Internet Financial Inc., or its predecessors, subsidiaries, divisions, and affiliates, including Poloniex LLC (collectively “Circle”), seeking information about U.S. taxpayers who conducted at least the equivalent of $20,000 in transactions in cryptocurrency during the years 2016 to 2020.  “Those who transact with cryptocurrency must meet their tax obligations like any other taxpayer,” said Acting Assistant Attorney General David A. Hubbert of the Justice Department’s Tax Division.

The IRS is Seeking The Records of Americans
Who Engaged in Business With or Through Circle,
A Digital Currency Exchanger Headquartered in Boston.

“The Department of Justice will continue to work with the IRS to ensure that cryptocurrency owners are paying their fair share of taxes.”

“Tools Like The John Doe Summons Authorized Today
Send The Clear Message To U.S. Taxpayers That The IRS
Is Working To Ensure That They Are Fully Compliant
In Their Use Of Virtual Currency,”
Said IRS Commissioner Chuck Rettig.

“The John Doe summons is a step to enable the IRS to uncover those who are failing to properly report their virtual currency transactions. We will enforce the law where we find systemic noncompliance or fraud.”

Cryptocurrency, as generally defined, is a digital representation of value. Because transactions in cryptocurrencies can be difficult to trace and have an inherently pseudo-anonymous aspect, taxpayers may be using them to hide taxable income from the IRS.

In The Court’s Order, U.S. Judge Richard G. Stearns
Found That There Is A Reasonable Basis For Believing
That Cryptocurrency Users May Have Failed
To Comply With Federal Tax Laws.

The court’s order grants the IRS permission to serve what is known as a “John Doe” summons on Circle. The United States’ petition does not allege that Circle has engaged in any wrongdoing in connection with its digital currency exchange business. Rather, according to the court’s order, the summons seeks information related to the IRS’s “investigation of an ascertainable group or class of persons” that the IRS has reasonable basis to believe “may have failed to comply with any provision of any internal revenue laws[.]” According to the copy of the summons filed with the petition, the IRS is requesting that Circle produce records identifying the U.S. taxpayers described above, along with other documents relating to their cryptocurrency transactions.

According to Law360, a number of observers have expected federal agencies to ramp up cryptocurrency-related enforcement this year. The DOJ released its crypto enforcement framework in October, and in December, the U.S. Treasury Department's financial crimes unit proposed a rule that would require institutions to submit transaction reports verifying the identities of customers transferring convertible virtual currencies such as cryptocurrencies worth more than $10,000 in a single day. The Financial Crimes Enforcement Network cited national security concerns related to illicit finance as justification for the proposed rule, but the rule has been met with considerable pushback from the industry. David A. Hubbert, acting assistant attorney general for the DOJ's Tax Division, emphasized that tax compliance is also in the agency's sights. "Those who transact with cryptocurrency must meet their tax obligations like any other taxpayer," Hubbert said in a statement. "The Department of Justice will continue to work with the IRS to ensure that cryptocurrency owners are paying their fair share of taxes."