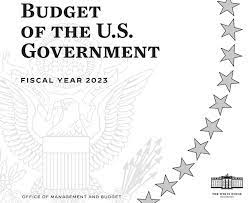 President Joe Biden’s 2023 federal budget, released Monday April 25, 2022, proposes tax hikes on the ultra-wealthy and corporations while providing billions of dollars in new spending for the Defense Department and the Justice Department.

The proposal sent to Congress touts a reduction in the federal budget deficit of more than $1 trillion over the next 10 years.

This is paid for, in part, by raising the corporate tax rate from 21% up to 28%, a rate favored by progressive Democrats but opposed by key moderates. Biden also proposes a new 20% minimum tax on the top 0.01% of earners and households worth more than $100 million.

Increase Taxes on Corporations (-$1,555 billion). The President's budget would raise the corporate income tax rate from 21 percent to 28 percent. This proposal is inclusive of a 20 percent minimum tax (up from 10.5 percent today) on foreign-earned Global Intangible Low-Based Tax Income. The budget would also reform the taxation of foreign business income by incorporating global efforts to combat corporate tax avoidance.

Increase Taxes on High-Income Households (-$780 billion). The President's budget would increase the top individual income tax rate from 37 percent to 39.6 percent - the top income tax rate prior to the enactment of the Tax Cuts and Jobs Act. It would also establish a 20 percent minimum tax on households with assets worth $100 million or more, tax capital gains as ordinary income for high-income earners, and tax gains at death. Moreover, the budget would close several Estate Tax loopholes by changing rules for certain trusts, improving estate tax administration, improving the valuation of assets, and tightening other exemptions.

Committee for a Responsible Federal Budget