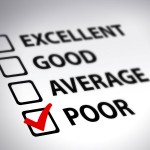 On October 19, 2020 we posted TIGTA Lists 10 Most Serious Challenges for IRS for FY 2021, where we discussed that TIGTA, in an Oct. 14 memorandum to Treasury Secretary addressed the 10 most serious management and performance challenges confronting IRS in fiscal year 2021. TIGTA has a statutory requirement to submit an annual report on the subject. Herein would like to discuss problem #7 IMPROVING TAX REPORTING AND PAYMENT COMPLIANCE:

One of the IRS’s key responsibilities is to ensure that taxpayers comply with the tax law. The gross Tax Gap is the estimated difference between the amount of tax that taxpayers should pay and the amount paid voluntarily and on time.

The Average Annual Gross Tax Gap Is Estimated To Be
$441 BILLION For Tax Years 2011 Through 2013, And Approximately $39 BILLION (9 Percent) Is Due To Nonfilers. 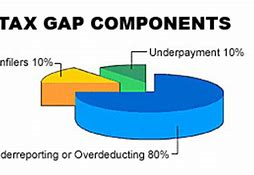 Nonfilers are taxpayers who do not timely file a required tax return and timely pay the tax due for such delinquent returns. According to the IRS,high-income nonfilers, although fewer in number, contribute to the majority of the nonfiler Tax Gap.

TIGTA also reported that the IRS could better use Currency Transaction Reports (CTR) to improve its compliance activities. Federal law requires financial institutions to report currency (cash or coin) transactions of more than $10,000 conducted by, or on behalf of, one person, as well as multiple currency transactions that aggregate to more than $10,000 in a single day. The Financial Crimes Enforcement Network Form 112, Currency Transaction Report, is used to report these transactions. The IRS considers CTR information useful to identify cash activity that may not be reported accurately on the income tax return. It may lead the examiner to discover sources of unreported income. However, some subjects of the CTRs with significant dollar amounts of cash transactions may not be filing income tax returns.

TIGTA Found That 5,266 Subjects of The CTRs Totaling
More Than $1.9 Billion Did Not File Income Tax Returns
For Tax Year 2017; However, The IRS Is Not Using
The Data To Identify These Nonfilers. 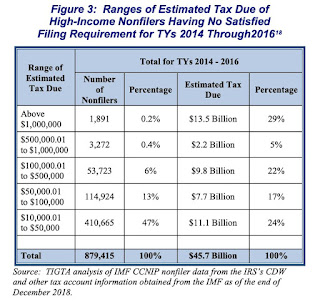 Large corporation (those with assets of $10 million or more) tax noncompliance contributes an estimated $26 billion to the average annual underreporting Tax Gap. The IRS uses a computer model, the Discriminant Analysis System (DAS), to systemically score the examination potential for Form 1120, U.S. Corporation Income Tax Return, tax returns with total assets of $10 million or more. Generally, the higher the score, the greater the audit potential. However, TIGTA reported that the IRS could improve the DAS model to better identify returns with a higher likelihood of potential tax adjustment. We analyzed 10,755 returns closed in the DAS workstream during FYs 2015 through 2018 and found that 47 percent were closed with no change to the tax return. Although the IRS is updating the DAS model to improve the no-change rates, TIGTA found that it is not leveraging all available examination information, such as the examination scope and knowledge on productive issues, when developing new formulas, and it plans to test new formulas only on returns that are nearly a decade old.

“Although no longer listed, achieving operational efficiencies should remain an area of continued focus for the IRS,” George added.

The agency is facing “significant” resource challenges, he said, citing IRS’s budget reduction in real terms over the past decade and the loss of some 29,000 full-time positions, including more than 14,600 key enforcement personnel.