Jersey & Swiss Firm Admits to Conspiring with U.S. Taxpayers to Hide Assets Offshore & Turns Over its US Clients 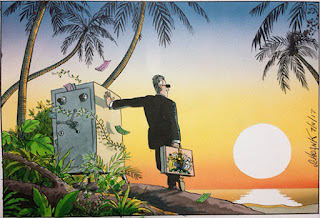 According to documents filed in Los Angeles federal court, Strachans was an independent firm providing administration to offshore structures for clients residing in a range of countries, including citizens and residents of the United States (U.S.-based clients).
This included the formation of trusts and offshore companies, administration, bookkeeping, and accounting. Strachans additionally, however, helped U.S.-based clients hide assets from the IRS and evade taxes through the following:

Previously Philip Jepson Egglishaw, was involved in Strachans, an accounting partnership which was previously based in Jersey before relocating to Switzerland, had also been wanted by Australian authorities who claim that he set up a US$300 million network of tax avoidance schemes and lured prominent Australians into them for more than three years, including actor Paul Hogan, star of 1980s film Crocodile Dundee, from who Mr Egglishaw stole $34 million which was being held in a Swiss bank account.
Strachans accepted responsibility for its conduct by pleading guilty, stipulating to the accuracy of an extensive Statements of Facts, and paying a fine of $500,000.
The October 6, 2020 guilty plea is the direct result of Strachans’ voluntary disclosure of its criminal conduct in May 2014, and its full and ongoing cooperation with the Department of Justice in connection with its criminal investigations.
Do You Have Undeclared Income From Strachans
or Another Offshore Bank or Financial Advisor?