Which of President Trumps Tax Proposals Will Become Law?

As it relates to potential tax changes as a result of the Trump administration, we posted:


Now according to a recent Wells Fargo Monthly Economic Outlook, they have incorporated a set of fiscal policy assumptions based on what we think is the most likely outcome based on policy proposals from President Trump and senior congressional leaders.
While they recognize the challenges of forecasting policy outcomes in the current environment, they believe the following assumptions provide the most realistic baseline scenario that we will tweak in the months ahead as new developments unfold.

First, they are assuming that there is a repeal of the ACA and associated taxes and that there is also a general framework for a replacement bill. At this time, it is unclear what a replacement bill may look like. However, for the purposes of our analysis, we assume that the ACA is replaced with a similar-sized plan resulting in little if any additional changes in the size of the federal budget deficit over their forecast horizon, the end of 2018.
On the individual tax policy front, they expect the elimination of the alternative minimum tax, along with estate and gift taxes. In addition, they expect an individual tax cut roughly the same size as the fiscal and economic effect of collapsing the current seven tax brackets into three tax brackets as contained in the Ryan blueprint introduced last year. (House GOP. (2016). “A Better Way.” http://abetterway.speaker.gov/_assets/pdf/ABetterWay-Tax-PolicyPaper.pdf). 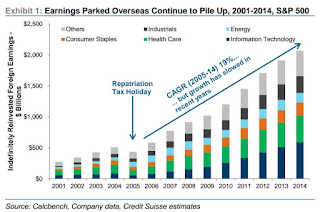 Wells Fargo also expects a permanent reduction in the tax rate for profits from overseas to 8.75 percent for cash and cash-equivalent profits and 3.5 percent on other profits.
At this time, they do not believe there is a path for the passage of a border-adjustability tax or any changes to the deductibility of interest expenses in the corporate tax code, which, in our view, limits the magnitude of the corporate tax cut to a top rate of 30 percent.
Like the individual tax policy changes, Wells Fargo expects only corporate tax cuts and no reforms such as boarder adjustability or removing interest deductions. Their view is that these reforms face major political opposition, and they find it difficult to believe such policies will be enacted, at least in the near term.


Wells Fargo currently does not have any trade policy changes, such as tariffs, incorporated into their forecast at this time but fully recognize that there is a decent probability of such policies becoming unilaterally enacted by President Trump, at least on a one-off basis.