More Swiss Banks Are Striking Deals With the DoJ Including Providing Your Tax Information!

"I would stay tuned," Acting Assistant Attorney General Caroline Ciraolo of the Justice Department's Tax Division said in an interview late on Tuesday, adding that a number of non-prosecution agreements will be signed in the "very near future."

Last week, Swiss bank BSI SA became the first bank to reach a resolution under a voluntary disclosure program for tax-related offenses run by the Justice Department. BSI agreed to pay a $211 million penalty after admitting it had for decades assisted thousands of U.S. clients in opening accounts in Switzerland and hiding assets from tax authorities.

As a result of leads from banks involved in the voluntary disclosure program, Ciraolo said, the Justice Department is going after individual account holders as well as bankers and other professionals who helped conceal offshore accounts. 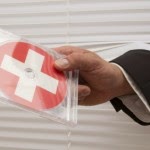