Senate Finance Committee chairman Max Baucus, D-Mont., has released the first in a series of discussion drafts for overhauling the Tax Code, with the first set of proposals focusing on international tax reform.

The proposal details ideas on how to reform international tax rules to spark economic growth, create jobs and make U.S. businesses more competitive.
Additional tax reform discussion drafts will be released later this week.
Baucus and his counterpart in the House, Rep. Dave Camp, R-Mich., chairman of the tax-writing House Ways and Means Committee, have committed to drafting comprehensive tax reform legislation this year after making joint appearances around the country this year to listen to taxpayer concerns.

Summary of the Staff Discussion Draft

Tax All Foreign Income of U.S. Companies Immediately or Not at All. The staff discussion draft ends the lock-out effect and replaces the deferral system with a new, more competitive system under which all income of foreign subsidiaries of U.S. companies is taxed immediately when earned or is exempt from U.S. tax, after which no additional U.S. tax is due. 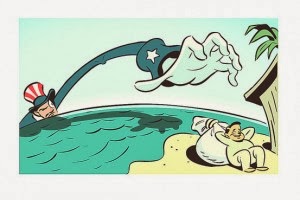 Modernize and Simplify Other International Tax Rules. The staff discussion draft:
However, the prospects for passing a tax reform package appear increasingly unlikely in the current atmosphere of partisan rancor and gridlock in Congress. But 2013 is seen as a better year to try to enact a tax overhaul than 2014, when lawmakers will be focused on the elections.

However, it is our opinion based upon past legislation, once something is in the form of the tax bill even where it doesn't pass in the year it's drafted it eventually will continue to make it to the floor until it does pass.

An example of this is the expatriation rules which first surfaced in 1997 and eventually  was passed as originally drafted in 2008!

AccountingToday
Posted by Ronald A. Marini, Esq. at 3:26 PM