Cayman Banks to Disclose US Taxpayer's Information to the IRS! 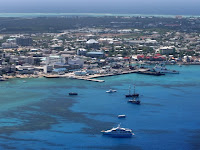 We originally posted on August 26, 2013, Caymans Makes It Tougher for Wealthy to Hide Money! Were we discussed that the Cayman Islands, known as a haven for wealthy Americans seeking to stash cash overseas without scrutiny from the U.S. government, is about to become less secret.

United States’ taxpayers are required to report offshore financial holdings. This includes bank accounts, certificates of deposit, offshore brokerage accounts and even some life insurance products. Reporting is done annually on a Report of Foreign Bank and Financial Accounts, more commonly known as an FBAR form. (Depending on how those assets are held, there may be a host of other forms required as well.)
While some people think of secret numbered Swiss bank accounts when thinking about offshore finances, many Americans have accounts, hedge fund holdings and insurance products in the Cayman Islands.

Coming directly on the heels of the IRS’ agreement with Switzerland to access Swiss bank records, the United States and the Cayman Islands have reached a similar accord. The Caymans becomes one of the newest countries to sign on to the Foreign Account Tax Compliance Act (FACTA). Congress passed FATCA in 2010 to require foreign banks and financial institutions to provide information about accounts with ties to the United States.

Quickly, the traditional bank secrecy jurisdictions such as the Cayman Islands are becoming more transparent. At the same time, the IRS is getting much better at ferreting out unreported foreign accounts.

In lieu of individual banks and other financial firms directly reporting to the IRS, the Cayman government negotiated to be the collector of information. They will then provide the information to the IRS.

The automatic reporting provisions of FATCA and the agreement with the Cayman Islands begins next year. Banks will be required to do a look back to catch anyone who simply elected to close their account or transfer their money in anticipation of the new law.
Do you have an Unreported Account in
the Cayman Islands or Elsewhere?
Contact the Tax Lawyers at