New $25,000 Penalty for Not Reporting SMLLC with Foreign Owner Now Being Assessed by the IRS

In a December 2016 post, Foreign Owned Domestic Disregarded Entities Must Report Under New Regs. we discussed that the IRS has now issued final regulations and they treat a domestic disregarded entity wholly owned by a foreign person as a domestic corporation separate from its owner, but only for the reporting, record maintenance and associated compliance requirements that apply to 25% foreign-owned domestic corporations under Code Sec. 6038A.

For US tax purposes, a limited liability company (LLC), that has a single owner (Single Member LLC, or SMLLC) and is not classified as a corporation is generally disregarded as separate from its owner (a Disregarded Entity). The economic activities of the SMLLC are attribute to the owner of the LLC for tax purposes, as if the LLC did not exist.

This concept allowed a foreigner to use a SMLLC to conduct certain economic activities in an “anonymous” manner prior to TCJA 2017.

Foreigners have traditionally used SMLLCs to do the following activities, without having to declare anything in the United States:

In preparation for exchanging more information with other countries, at the end of 2016 Congress revised the law so that SMLLCs were no longer considered transparent for purposes of reporting on their international transactions and foreign ownership. Beginning with the 2017 tax year, SMLLCs with foreign owners and reportable transactions needed to:

Foreign-owned Corporations were already subject to filing form 5472, and the requirements for SMLLCs are basically the same with one important exception. The definition of “reportable transactions” was expanded for SMLLCs to include not only things such as payments and loans, but also capital contributions and distributions. Therefore, it can easily be that Form 5472 and the corresponding information will have to be presented by each SMLLC every year.

The penalty is also applied whenever an incomplete, or late form is filed. Because a separate form 5472 is required for each “related party” in each year that there is a reportable transaction, the penalty can easily multiply for each transaction which the SMLLC has with each “related party.” In addition, failure to maintain updated books to verify transactions constitutes an additional $25,000 penalty.

Both penalties increase by $25,000 each month that non-compliance continues in case the breach is not resolved within 90 days after the tax authority sends the notice of a penalty. If the LLC does not pay the penalty, the tax lien could be extended to the assets of the LLC even if they are transferred to another owner and in some cases, be enforceable against the owners of the LLC. 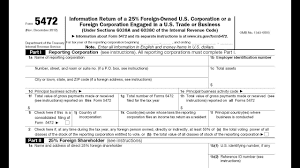