According to Law360, the Internal Revenue Service announced on May 14, 2018 that it will undertake a campaign to increase compliance for rules involving nonresident aliens' tax treaty exemption claims.

Because the statutes involving income-based tax treaty exemption claims can be confusing, the IRS' Large Business and International Division will focus on education and outreach to increase awareness and compliance, according to a statement.

“Some nonresident alien taxpayers may either misunderstand or misinterpret applicable treaty articles, provide incorrect or incomplete forms to the withholding agents or rely on incorrect information returns provided by U.S. payors to improperly claim treaty benefits and exempt U.S. source income from taxation,” the statement said.

“This Campaign Will Address Noncompliance through a Variety of Treatment Streams, Including Outreach/Education and Traditional Examinations.”
Under the provisions of certain treaties, some payments from U.S. residents to nonresident aliens are not subject to the complete withholding obligation of 30 percent, as defined under Internal Revenue Code Section 1441.

The Campaign Was One of Six the Large Business and International Division Announced Monday, Following the Rollout of Five Others in March.
﻿

Nonresident aliens will also be the subject of additional campaigns, designed to encourage compliance in instances when they inappropriately apply for education tax credits, which are available only to U.S. residents, and income-oriented credits, for which they are also not eligible.
The announcement highlighted the agency's priority in ensuring compliance with both effectively connected and fixed, determinable, annual periodical tax treaty-based income credits. 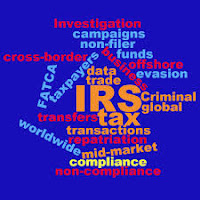 The Agency Will Also Pursue Campaigns to Increase Compliance with Withholding, Deposit and Reporting Requirements per IRS Form 1042 and

Compliance with the Reporting of Transactions with Foreign Trusts, per IRS Form 3520, According to the Announcement.
The process for ensuring compliance may include "examinations and penalties assessed by the campus when the forms are received late or are incomplete," the announcement stated.