All That You Wanted to Know About Form 706NA - Part I

On Tuesday, August 15, 2017 we posted Issues Concerning Filing a Form 706NA? where we discussed that deceased nonresidents who were not American citizens are subject to U.S. estate taxation with respect to their U.S.-situated assets. We also discussed that Many foreigners owning property or assets in the United States are in violation of 706-NA filing requirements because of a number of misunderstandings. The basic rule is pretty clear-if a foreign decedent has assets in the United States with a gross value in excess of $60,000, the estate is supposed to file a tax return with the Internal Revenue Service.


Now our Estate Tax Attorney, Robert S. Blumenfeld, Esq. is supplementing this posting with a discussion regarding Form 706 NA in a 3 part series, which we have titled All That You Wanted to Know About Form 706NA. PART 1: 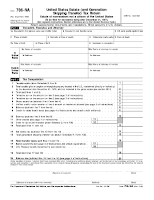 In the area of estate tax compliance, many of us have prepared Form 706’s, the estate tax return for US citizens and domiciliaries.  To be sure, this form is quite voluminous and can take a while to fill out but there are very few mysteries beyond schedule E; what percentage of an asset might be includable in an estate, the value of an annuity, what debts and expenses are deductible, the calculation of the marital deduction, and the generation-skipping tax computation.


The Form 706NA, however, preparation of the tax return for the estate of the nonresident alien owning property in the United States, can present a more daunting task.
Form 706NA is deceptively simple- two pages- how difficult could it be to prepare? For 32 years as a senior attorney at the IRS, our Estate Tax Attorney Robert S. Blumenfeld audited these tax returns, and he can tell you that they are more fraught with more potential mystery than the Sphinx.
Let's look at line 1 where it requests  the decedent's name. Many foreign decedents come from countries where people have hyphenated names, especially the spouses. So is the correct name Maria Smith or Maria Smith- Gonzalez? It is often best to go back to the country where the decedent lived and use the name which drops the post hyphenated portion. Most of the tax returns that he has seen or prepared, are based it on this concept.

The next box asked for the decedent’s tax identification number. Virtually all American citizens born in the United States are assigned SS#’s at birth so there is no problem. In the case of a nonresident alien (N/A), there is no tax identification number so we enter “N/A-nonresident alien” inbox two.
This creates the second problem. If the estate has to pay any transfer tax, when the return is filed, there is no module (TIN or SS#) into which the IRS can place the payments. Ergo, the IRS has a fund called “unpostables” where money paid to the IRS lacks an identification number with which to associate it. Therefore, if you file a Form 706NA which shows tax, be certain to keep a copy of the front of the check and photostat the endorsement after the check is negotiated. This is the least difficult way to associate the payment with the tax return. Absent keeping these two identification benchmarks, it could take many months for the IRS to agree that the payment in the unpostable module should be associated with a particular estate.
Decedent’s domicile and citizenship are very critical. The United States currently has circa 20 estate/gift tax treaties with foreign countries, many of which are in Europe.
A non-resident alien from a non-treaty country receives an estate tax exemption (unified credit) of $13,000 which basically means that the first $60,000 is not taxed. The unified credit for treaty based countries can reach a figure of $5.5 million free of tax. In addition to this, in each instance where one represents a nonresident alien decedent, it is critical to find out whether this is a country which has such a treaty with the United States.
Next, it is critical to determine the citizenship and domicile of the decedent. When one peruses the individual treaties, one will note that some treaties are based on domicile, others on citizenship.  A German citizen domiciled in say Mexico would not be able to utilize the German treaty because that particular treaty is predicated on domicile. A Mexican citizen however, domiciled in Germany, could enjoy the full benefit of the US/German treaty. Ergo, a German living in Mexico would have a $60,000 exemption from tax while a Mexican domiciled in Germany would have a $5.5 million exemption.
Have a US Estate Tax Problem?