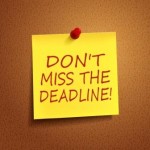 Based on the reasoning in an example in Rev Rul 2015-13 and on the instructions to 2016 Form 1040-ES, Estimated Tax for Individuals, the due date for the first 2016 estimate for individual taxpayers will be Monday, April 18, 2016, regardless of your state of residence.