Swiss prosecutors Thursday said they opened an investigation into the theft of data from Swiss bank Julius Baer that German authorities allegedly bought amid a drive to crack down on suspected tax evaders. The office of Switzerland's attorney general Thursday said a suspect has been arrested in connection with the alleged data theft, but declined to provide additional information. 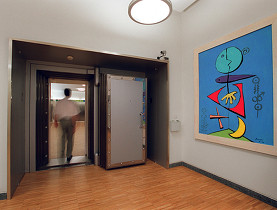 Swiss media are reporting that the suspect is a German national who was working for an information technology firm hired by Julius Baer, and that the stolen data contained information on undeclared bank accounts, which was then sold to tax authorities in the German federal state of North-Rhine Westphalia.

Tensions between Switzerland and Germany are already rising ahead of a key vote in German parliament to ratify a treaty between the two countries aimed at drawing a line under past allegations that Swiss banks assisted tax evasion and at mapping out a future path.

Under the proposed agreement, Germans with hidden accounts in Switzerland would pay a withholding tax to their home country each year and be charged a punitive retroactive tax on undeclared capital to regularize the past. In exchange, the Swiss won't turn their names over to Berlin.


Call US before Uncle Sam finds you!