According to the DoJ, New York couple and their adult son were sentenced to prison on July 13, 2022 for conspiring to defraud the United States and for tax evasion.

In November 2021, John Zourdos, his wife Helen Zourdos and their son Dimitrios Zourdos, all of Rome, were each convicted by a federal jury of conspiracy to defraud the United States, tax evasion and helping to file false corporate tax returns.

According to evidence presented at trial and other court documents, John, Helen and  Dimitrios operated three Dippin Donuts coffee and donut shops with locations in Rome and New Hartford.

From 2012 To 2017, The Defendants Concealed From
The IRS Approximately $4.5 Million In Cash Sales. 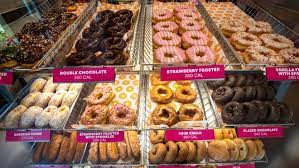 During that period, they evaded more than $2 million in individual and corporate taxes by, among other things, depositing cash directly into their personal bank accounts instead of into business bank accounts, providing incomplete information to their accountants, causing their accountants to file false individual and corporate tax returns with the IRS, and funding personal expenditures directly with undeposited and unreported cash.

In addition to the terms of imprisonment, Judge Hurd ordered each defendant to serve three years of supervised release and to pay more than $2 million in restitution to the United States.