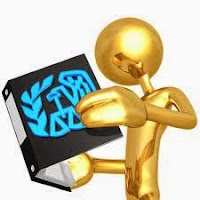 Data are classified by industry, size of total assets, and size of business receipts. Separate tabulations of data reported on Form 1120S, U.S. Income Tax Return for an S Corporation, are also included.


Six sections make up this report. 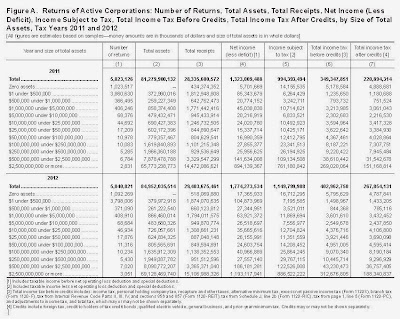 Total income tax after credits, the amount paid to the U.S. Government, rose 21 percent (or $46 billion), from $221 billion in 2011 to $267 billion in 2012. Of the 5.8 million active corporations for Tax Year 2012, approximately 4.2 million were passthrough entities. These entities include regulated investment companies (RICs), REITs and S corporations [1]. Passthrough entities pay little or no Federal income tax at the corporate level. By law, they are required to pass any profi ts or losses to their shareholders, where they are taxed at the individual rate. Pretax profi ts for passthrough entities increased 23.3 percent (or $136.4 billion) during 2012.

The remaining 1.6 million corporate returns reported total receipts of $22.3 trillion, an increase of 3.1 percent from 2011 to 2012. Excluding pass through entities, approximately 825,000 corporations reported net income for 2012 [2].

Approximately 45.4 percent of all returns with net income and total assets greater than $2.5 billion had a tax liability for 2012. Excluding passthrough entities, this percentage increased to 88.2 percent for the year.