Your Swiss Bank Info Is Being Transferred To The US Govt As We Speak! ... This Is Not An April Fools Joke! 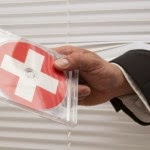 We originally posted Tuesday, January 28, 2014 "Offshore Swiss Bank Account? This May Be Your Last Chance To File A Voluntary Disclosure!," where we discussed that The United States Justice Department has received 106 requests from Swiss entities to participate in a settlement program aimed at ending a long-running probe of tax-dodging by Americans using Swiss bank accounts according to a senior US official.

On August 29, 2013, we previously posted "Swiss Banks Agree to Plan to End Past US Tax Evasion Issues!" , where we discussed that Swiss banks were ready to pay hefty fines for sheltering United States tax fugitives under the terms of a new deal given the green light by the Swiss government.

Kathryn Keneally, a senior official of the US DOJ's tax division, said the department was 'gratified' by the response to the offer, although it does not expect that all the applicants will be granted non-prosecution. The program is open only to banks, who will have to pay between 20 and 50 per cent of the value of undeclared US-owned accounts as at 1 August 2008.

These banks will have to disclose a great deal of information about
their American clients, even including some of their names
by April 30, 2014!

The Department of Justice's Tax Division will strictly enforce an April 30 deadline for Swiss banks to comply with disclosure provisions of a bilateral U.S.-Switzerland program to root out tax evaders, a senior DOJ official has subsequently stated.

We have spoken to numerous clients, who have been advised this week, that their Swiss banks are in the process of turning their account information over to the IRS, pursuant to this US settlement program.

US taxpayers who have unreported income from Swiss bank accounts may now want to consider applying for the US Offshore Voluntary Disclosure Program (OVDP), which sets a limit to the penalties imposed on them by the Internal Revenue Service (IRS) for failing to declare foreign assets and earnings.

However, once the Swiss banks disclosed an account holder's name to the IRS, which they must do by no later than April 30, 2014; the OVDP option is no longer available to that US Taxpayer Account Holder.