The Internal Revenue Service is subjecting a relatively small percentage of wealthy taxpayers to tax audits, and less than half of the biggest corporations in the U.S. are now being audited, according to a new report.

The report, from Syracuse University’s Transactional Records Access Records Clearinghouse, or TRAC, found that 97 out of every 100 individual taxpayers who reported over $1 million in income weren’t audited last year, based on IRS statistics. In fiscal year 2010, such audits turned up $5.1 billion in unreported taxes. Now with just half the audits, the government uncovered only $1.9 billion in unreported taxes in fiscal 2018. 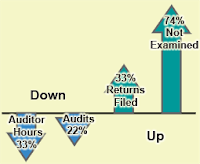 The Internal Revenue Service Has Been Dealing with a Series of Budget Cuts over the past Decade, and It Has Been Forced to Reduce the Number of Audits It Conducts As Other Priorities, ...Have Taken a Greater Priority.
Audits of Millionaires: The current situation here is the most alarming because the latest data reveal that 97 out of every 100 taxpayers reporting over a million dollars of income were not audited last year. And for these millionaires the puny number of IRS audits has been cut in half since 2010. See Figure 1.

Audits of Corporate Giants: More than half of the 633 largest corporations in the country - those with over $20 billion in assets - were not even audited last year. This is the first year that the audit rate has slipped below 50 percent. As recently as 2010, nearly all such returns (96%) were being examined by IRS. See Figure 2.  Audits in 2010 of large corporations (>$250 million in assets) turned up $23.7 billion dollars in unreported taxes. This had dropped in half to just $12.5 billion during FY 2018.

Figure 2. IRS Audits Less Than Half of Corporations with $20 Billion or More Assets
(Click for larger image)

Criminal Prosecutions: IRS referrals of taxpayers for criminal prosecution relative to population size have plummeted by 75 percent in the last twenty-five years, dropping by 63 percent in just the last five years. See Figure 3.


The Number of Taxpayers Convicted As a Result of IRS Investigations Reached an All-Time Low in FY 2018 – Just 928 and Only 530 of These Convictions Were for Tax Fraud!
The remaining 398 convictions were for other types of offenses such as identity theft, financial institution and investment frauds, money laundering, drug trafficking and organized crime. IRS of course has major responsibility for not only going after tax cheats who don't pay their taxes on legal sources of income, but also for tax evaders that fail to report and pay taxes on illegally gotten gains. See here for more details

Figure 3. Odds of IRS Referral for Criminal Prosecution Has Plummeted
(Click for larger image)
The report noted that for years, Congress has slashed the budget at the IRS, forcing it to cut back on staff dedicated to audits and criminal investigation. In 2010 IRS had more than 100,000 employees on staff. By June 2018, staffing had dropped 22 percent to just 79,071. Revenue agents and criminal investigators have fallen even more. Despite the additional responsibilities IRS was assigned to implement the Tax Cuts and Jobs Act of 2017, the IRS had 3,000 fewer employees than it had before the tax overhaul was passed.
Have an IRS Tax Audit Problem?